Joshua Bowen Smith was a prominent caterer in the Boston area. Born in Pennsylvania to a black mother and white father, he moved to Boston as a young adult and became the headwaiter at the Mount Washington House hotel. He eventually started his own catering business, becoming the chief caterer for Harvard College events. Through his work, he became acquainted with the Boston abolitionist community, including Charles Sumner, Lewis Hayden, William Lloyd Garrison, and Theodore Parker. He became involved with the Underground Railroad, hosting fugitive slaves at his house in Cambridge. His business gave him the opportunity to keep his ears open for news about slavecatchers and others unfriendly to the abolitionist cause.

In 1863, Smith catered the “John Brown Party” held at George L. Stearns’s mansion in Medford during which Edward Augustus Brackett’s bust of John Brown was unveiled. Smith also pressed for a monument to the 54th Massachusetts Infantry Regiment, although he did not live to see it completed. When Sumner passed away, his will gifts Smith with the Renaissance painting "The Miracle of the Slave." 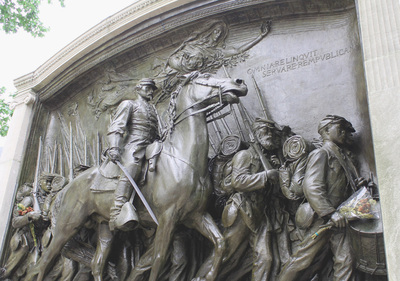 Unfortunately, Smith’s business went bankrupt after Governor John A. Andrew refused to reimburse him for meals catered for the Massachusetts 12th Regiment, stating that he was not authorized to do so. Smith later sued the state for compensation but did not receive enough to recoup his costs.

Smith continued to reside in Cambridge, becoming the first black member of the Saint Andrew’s Freemason Lodge and representing the city in the Massachusetts legislature in 1873 and 1874.