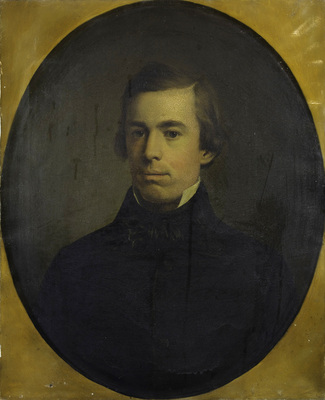 Thomas Starr King was a Universalist and Unitarian minister and became one of the most prominent politicians in California during the Civil War.

King was only 15 years old when his father, the pastor of the Universalist Church in Charlestown, Massachusetts, passed away. Reverend Edwin Hubbell Chapin led the church for the next five years, mentoring King until he was old enough to take over the pulpit himself. Two of King’s other most influential mentors were Hosea Ballou II (later the first president of Tufts University) and Theodore Parker (later one of the “Secret Six” who funded John Brown's raid on Harpers Ferry). While training, King also served as the headmaster of Medford’s West Grammar School and then as a clerk at the Charlestown Navy Yard. In 1845, he became the pastor at his father’s church, but just a few years later, he was appointed pastor of the Hollis Street Church in Boston, where he became a renowned abolitionist preacher.

During those years, King nurtured a friendship with George L. Stearns of Medford. In 1857, the two vacationed with their families in the White Mountains of New Hampshire.

In 1860, King was asked to be the pastor of the First Unitarian Church of San Francisco. In California, his lectures were always in favor of the Union. Abraham Lincoln credited him with preventing California from seceding from the United States.

King suffered his entire life from poor health and in 1864 he passed away. In 1931, a statue of King was placed in the United States Capitol to represent California for more than 75 years before it was replaced by a statue of Ronald Reagan in 2009. King’s statue is now located near the California State Capitol in Sacramento.