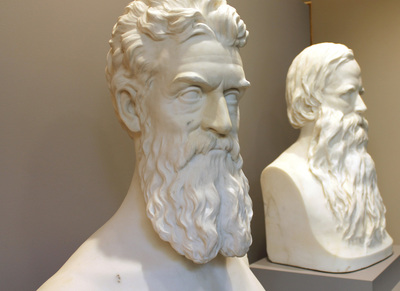 Busts of John Brown and George L. Stearns on Display

The son of George Luther Stearns recalled that when John Brown and George L. Stearns first met each other in 1857, they "met like the iron and the magnet. Each recognized the other at first sight, and knew him for what he was worth.”

The endeavors and subsequent fame of the radical abolitionist John Brown left his name imprinted in history, but Stearns's humility has obscured his own significant role, which included involvement in the antislavery movement and the raising of the United States’ first black regiment. It was also George Stearns and his wife Mary who commissioned the bust of John Brown while Brown lay in prison awaiting execution. Mary Stearns commissioned the bust of her husband years later.

The two busts remained at the Stearns Estate in Medford through the beginning of the 20th century until the estate was passed on to Tufts University in 1919. The bust of John Brown was subsequently damaged and eventually put in storage to be forgotten until 2015, when it was identified. In 2016, it was repaired using state-of-the-art 3D printing technology. Now restored and reunited, these two busts highlight Tufts University’s treasured connection with the Stearns Estate and the antislavery movement in greater Boston.

This online exhibit serves to explore the dramatic stories behind the busts and the development of the Stearns Estate as part of Tufts University.

Use the tabs labeled Discover the Stories and Explore by Topic at the top of this webpage to view the exhibit.