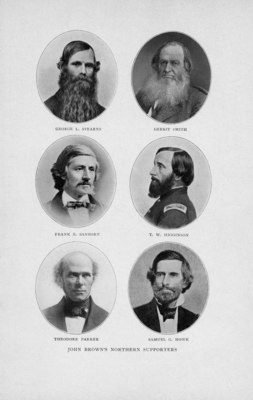 Thomas Wentworth Higginson was a Unitarian minister and one of the “Secret Six” who funded John Brown’s raid on Harpers Ferry. He wrote to Brown, “I am always ready to invest money in treason, but at present have none to invest.” During the Civil War, he served as colonel of the 1st South Carolina Volunteers, the first federally authorized black regiment.

Higginson was very active in abolitionist activities. After the dramatic rescue of Shadrach Minkins, Higginson joined the Boston Vigilance Committee. He was involved in the failed attempt to free Thomas Sims in 1853. In 1854, he was one of the activists who attempted to rescue Anthony Burns after his arrest in Boston. The attempt failed and a federal marshal was killed. Higginson and Lewis Hayden, who was also involved, fled to Worcester to avoid scrutiny.