Henry David Thoreau was a transcendentalist and one of the Concord literati of the 19th century. He is famous for writing Walden, a tomb reflecting on nature and simple life. Perhaps less well known are his radical abolitionist views, which called for civil disobedience against the American government because it allowed slavery. His 1854 essay "Slavery in Massachusetts" denounced the North for not insisting on slavery's demise in the South. He participated in the Underground Railroad by helping fugitive slaves escape north to Canada. On October 30, 1859, shortly after the arrest of John Brown after the failed raid on Harpers Ferry, Thoreau spoke in defense of Brown before the citizens of Concord. Brown's movement, he said, "is, in my opinion, the greatest service a man can render to God." Mary E. Stearns attended was present at this speech. 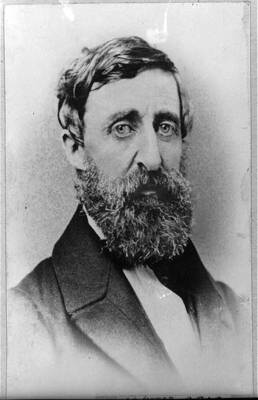 Henry David Thoreau
Courtesy of the Library of Congress