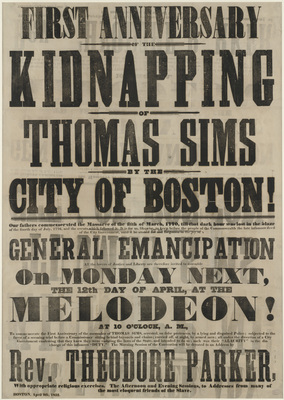 Thomas Sims was a young man who in 1851 fled slavery at the age of 17 and escaped to Boston. He was arrested on April 4, 1851, under the relatively new Fugitive Slave Act and held at the Boston Courthouse until his trial. Local abolitionists attempted to rescue him, as they had done with Shadrach Minkins two months earlier. However, the rescuers’ plans were thwarted when the windows of the courthouse were barred and chains placed around the building by federal marshals. Sims was convicted after a dramatic trial and returned to slavery in the South, disheartening local black residents and the abolitionist community.

The public arrest and trial of Sims was one of the motivations for George L. Stearns to become more actively involved in the abolitionist movement. He was horrified by the federal overreach and by the immorality of Sims’s return to slavery. Stearns’s son Frank P. Stearns recalled, “The Fugitive Slave Law affected Mr. Stearns like the blow of an assailant. He purchased a revolver and declared that no fugitive negro should be taken from his premises while he lived. From that time his political activity never ceased.”

At the anniversary commemoration of Sims's kidnapping, Theodore Parker spoke at the Melodeon in Boston.