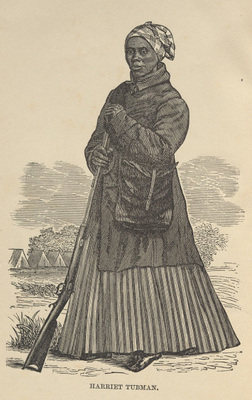 Harriet Tubman was an abolitionist and antislavery activist who had escaped from slavery in Maryland. After her escape to freedom, she returned to aid other enslaved individuals to freedom along the Underground Railroad. Tubman was in communication with John Brown to aid him in his attack on Harpers Ferry, but she fell ill shortly beforehand and was unable to be involved.

After Brown’s execution, Harriet Tubman viewed Brackett’s bust of John Brown. Franklin Sanborn recalled, “Overwhelmed by the stone likeness, the hero of the Underground Railroad declared: ‘It was not John Brown that died at Charles Town. It was Christ—it was the Savior of our people.’”