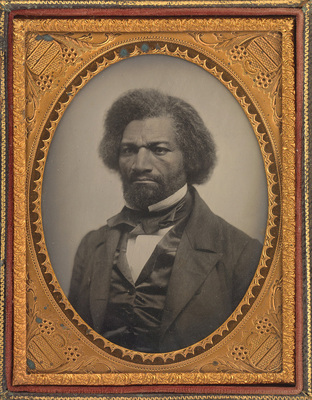 Frederick Douglass was a famous black orator and abolitionist of the 19th century. He was the editor of The North Star, an antislavery newspaper run out of Rochester, New York.

Douglass and John Brown were long friends until their relationship became strained over differing approaches in the fight against slavery. Douglass called Brown a “white gentleman” who was “in sympathy a black man” and stated that “his soul had been pierced with the iron of slavery.” Many years later, in 1881, Douglass delivered a speech about John Brown at Storer College at Harpers Ferry. The proceeds of his published speech were used to establish a John Brown Professorship at the college.

At the Jubilee Concert held at the Boston Music Hall to celebrate the Emancipation Declaration on January 1, 1863, Douglass led the audience in the singing of the hymn “Blow Ye the Trumpet Blow,” which was said to have been Brown’s favorite.

In 1863, George L. Stearns approached Douglass in Rochester when he first began recruiting for the 54th Massachusetts Infantry Regiment. The first two recruits were Douglass’s two sons, Charles and Lewis Douglass. Lewis was wounded in the 54th’s famous assault on Fort Wagner. Douglass continued to recruit for the 54th and 55th regiments.