After practicing civilian medicine for two years he reentered military service. As a surgeon Victor Prather served for three years abroad the aircraft carrier U.S.S. Shangrilla in the Mediterranean, stationed in Port Lyantey in Morocco. On return to the U.S., Lt. Cdr. Prather completed courses in aviation medicine and served as Flight Surgeon in Pensacola, Florida, and in the western Pacific, out of Pearl Harbor.

In 1960, Dr. Prather was transferred to "Project RAM" at the Bethesda Naval Research Institute to develop the space suit. This was the precursor to the Mercury program. Prather's mission was to test prototype astronaut flight suits against all forms of wear and pressures they would be subjected to while in earth orbit and in space. Prather tested spacesuits while under water for leaks, in low-pressure situations, and finally, in very high altitude balloon tests. Personal telemeter systems for human vital signs and many other devices were tested at ultra-high-altitudes for the first time.

On May 4, 1961,Victor Prather made an historic balloon flight with Malcolm Ross. Commanders Prather and Ross rose from the deck of the aircraft carrier U.S.S. Antietam, used as a movable platform for launching the giant plastic balloon. They reached an altitude of 113,720 feet or about 21 ½ miles over the Gulf of Mexico south of Pensacola, Florida - a world record altitude for air balloons which will not likely ever be broken. For nine hours their survival depended on their spacesuits whose actual operating capabilities they were to determine. They were exposed to minus 94 degrees Fahrenheit and air pressures below 0.1 pounds per square inch. The ascent and descent were highly successful, but Prather lost his life unexpectedly after slipping into the sea while being picked up by Navy helicopters.

His achievement was a direct contribution to man's conquest of space. Alan Shepard later went into sub-orbital flight with the certain knowledge that his space suit could withstand the extremes of the upper atmosphere.

Lt. Commander Dr. Prather was a scholar and a leader devoted to the advancement of man's knowledge. He was one of America's first space heroes. To memorialize a respected friend and classmate, Class of 1947 established the Class of 1947 Victor Prather Scholarship Fund on the occasion of their twenty-fifth reunion. For twenty years, the Fund awarded over fifty worthy Tufts students with scholarship for their education. Financial assistance is awarded to students who meet the university's criteria for need and who demonstrate in their studies the same enthusiasm for learning that Victor Prather did in his lifetime.

President Kennedy phoned and then received his widow, Virginia Merritt Prather J1947, and her children, at the White House to present the Navy's Distinguished Flying Cross awarded to Prather for "heroism and extraordinary achievement" 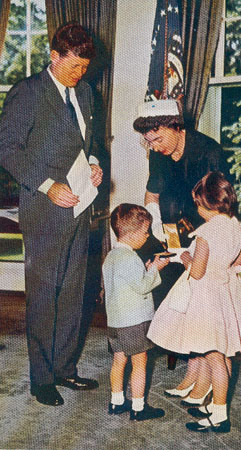