During World War II Tufts College was transformed by two Navy programs, the V-12 and NROTC. Student life changed dramatically as almost 1,600 Navy students studied college courses while simultaneously following the disciplined and strenuous military training of the Navy programs. At the same time life carried on as usual: students continued to study, go to football games, and complain about the cafeteria food.

Under the direction of President Leonard Carmichael, Tufts College wholeheartedly focused its energies on the war effort. The Navy presence on campus reflected this new purpose more than anything else. The regimen and traditions of the U.S. Navy were integrated into many aspects of campus life as the campus itself witnessed numerous physical changes and rearrangements.

The civilian male students, female Jackson students and returning war veterans were all affected. In 1942, Tufts implemented a year-round schedule, no spring or summer breaks and three days off for Christmas. "War courses," such as Camouflaging and Motor Transport, were offered to civilian students to help prepare the nation in case of invasion. Victory gardens, blood drives, first aid training, and book drives all became familiar activities and topics of conversation.

Throughout the war, Tufts tried to maintain the atmosphere of a normal college campus by continuing dances and organized sports in addition to other social events. Tufts role in the war, as it trained military personnel, participated in government research, and encouraged civilian support of the war, not only strengthened the academic and athletic programs at Tufts, but transformed it into a national institution. Overall, attending Tufts during the war years proved to be an entirely unique experience. 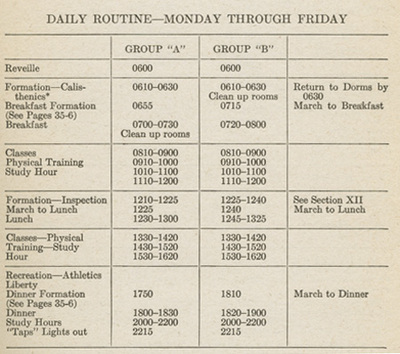 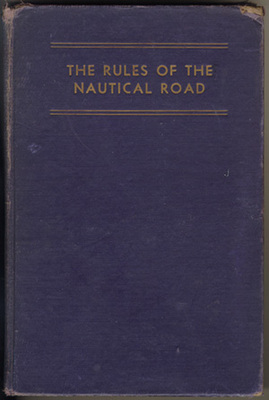 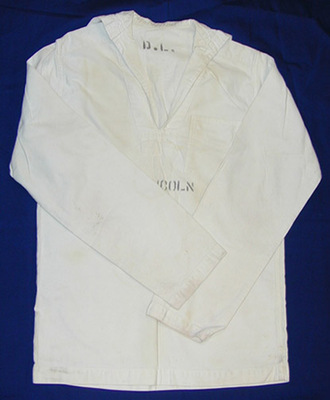 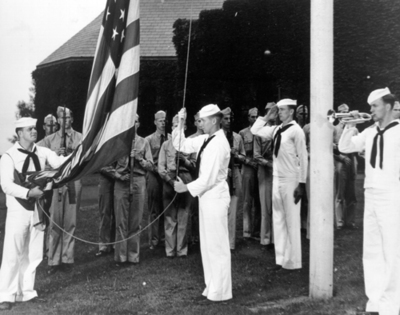 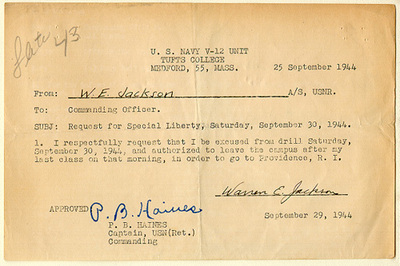 The Navy presence on Tufts campus affected nearly every aspect of daily life from the use of campus facilities to text books to daily dress.

For Tufts Navy students, the entire day followed a strict schedule. Each morning during the war, campus arose to the sound of a bugle at the early hour of 6 AM. Dressed in uniform, Navy students began calisthenics by 6:10. The remainder of the day included physical training, classes, meals and very little free time. Weekends permitted more free time, but was still regulated. From 12:30 PM Saturday until evening study hours on Sunday, Navy students were allowed liberty to travel within a 40 mile radius of Tufts. Travel beyond that limit required a request for special liberty.

The campus facilities were also transformed by the arrival of the Navy programs. Stratton, Paige, Fletcher, East, Dean, and West Halls all served as Navy dorms and Theta Delta Chi was used as the Navy Headquarters and dental clinic.

Curtis Hall served as the cafeteria for Navy students. The following poem was found pinned to a weekly menu in the lower mess hall April 1944:

American chow
Is better, right now,
Than millions abroad have been getting,

So it gives us a pain
When people complain
At the table our Uncle Sam's setting! 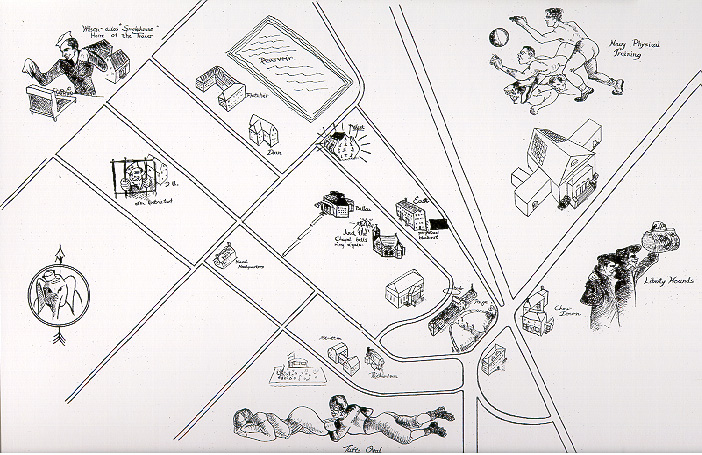 During the war, social activities and campus life in general were influenced by the Navy presence. Friday night Happy Hour, Visitors' Day, the Regimental Ball, and the Ring Dance were all Navy traditions that were widely popular among Tufts and Jackson students. Although the war had altered the priorities of Tufts as an institution, the Navy programs on campus and the war effort did not stop students from enjoying their college years.

Tufts NROTC held its first ring dance on August 26, 1944 based on the well-known Annapolis tradition. Each graduate walked through the huge ring where he received a ring and a kiss from his "VERY best girl. 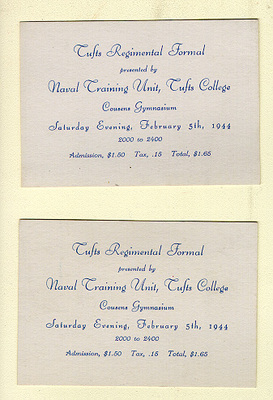 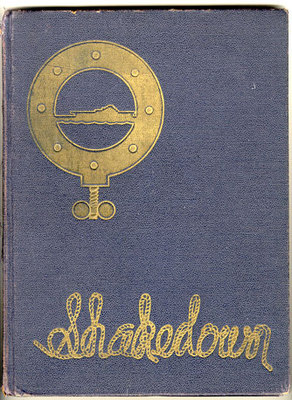 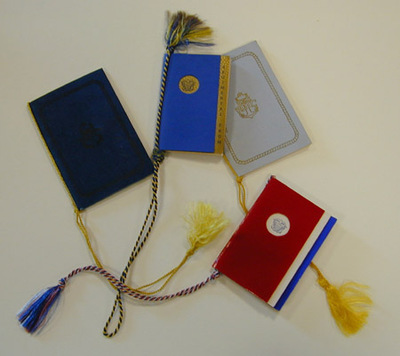 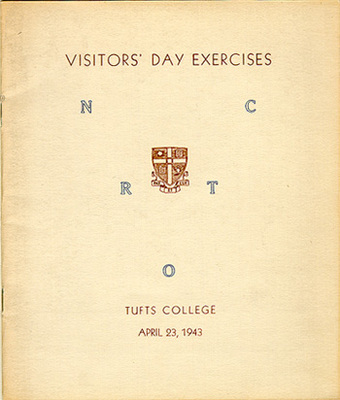 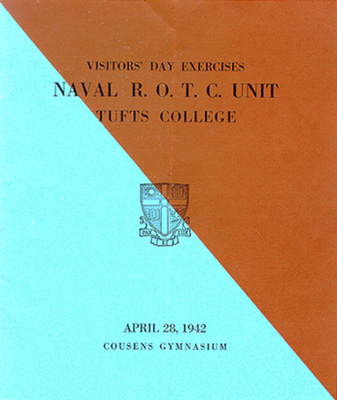 Visitors' Day at Tufts gave the Navy students an opportunity to demonstrate their skills.

Despite the Weekly's worries, the Naval programs' emphasis on physical education and the larger student population actually elevated the quality of athletics at Tufts during the war. While some varsity sports were cut back, intramural sports were significantly enlarged. One of the main challenges was finding competitors since many schools cancelled extra-curricular activities for the duration of the war. Tufts was one of few colleges that played a full football schedule in 1943. Other wartime changes included the addition of a co-ed cheerleading squad, an ROTC rifle and pistol team, and mandatory 3 hour per week physical education for all civilian students during all 4 years at Tufts. 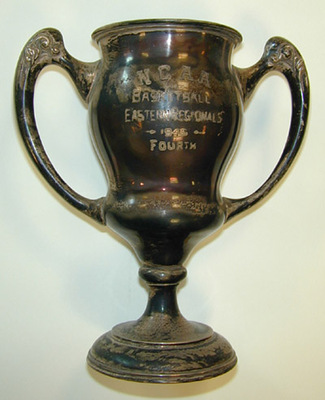 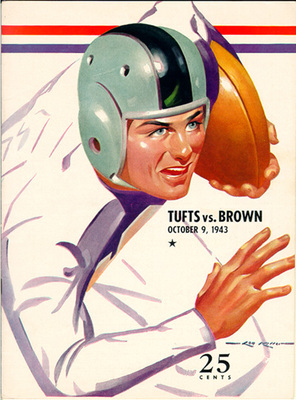 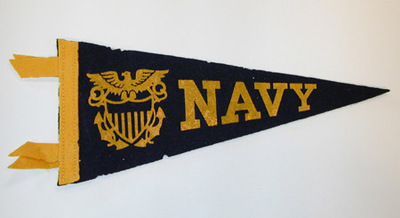 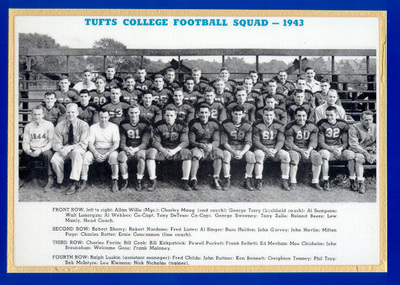 This was the cry as Navy students marched through the streets of Somerville and Cambridge to the Tufts-Harvard football game in 1943, the beginning of a wartime tradition at Tufts. After the game, pieces of the goal post were taken as souvenirs of the Jumbos' victory. 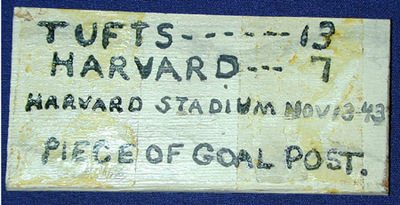 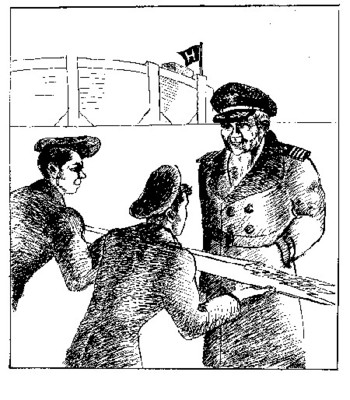 From the onset of the war, the college administration was concerned with Tufts' contribution to the war effort. In 1942, a questionnaire was distributed in the Tufts Weekly, now the Observer, in an attempt by the college to make use of all skills and interests of students. Some of the war activities held at Tufts include: 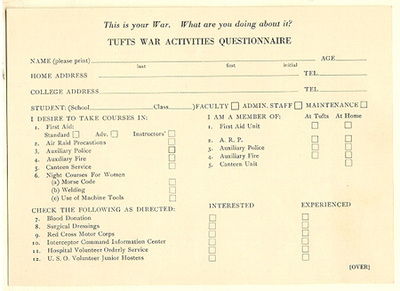 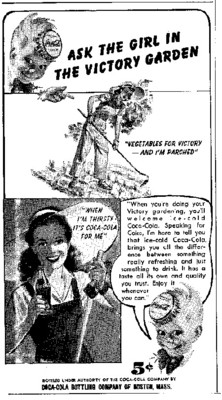 Staff and students planted numerous victory gardens around campus. Members of the community, including a letter carrier and two firemen, also chipped in and took advantage of the campus gardens.

The possibility of bombing during the war was perceived as a real threat. Air raid shelters and the drills held on campus attempted to prepare students and faculty for such an emergency. 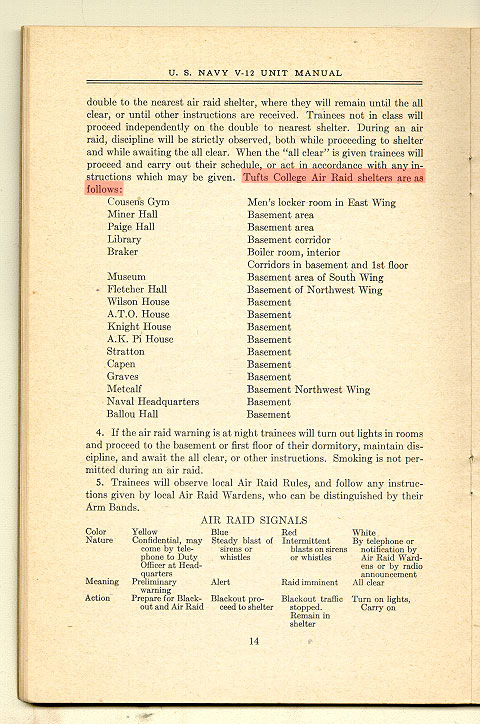