Chronology of Education and Military Career: 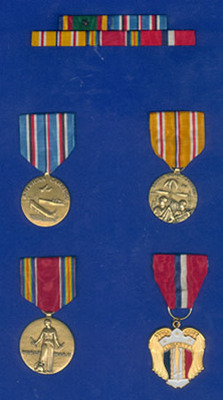 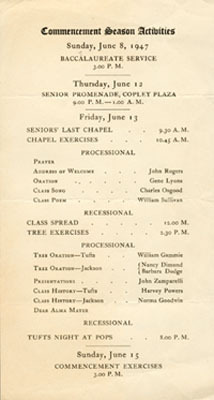 December 2, 1942
Signed up for V-1 Program as enlisted man on inactive status while undergoing college training with promise of commission when ready for Midshipmen's School. All V-1 students were transferred to the V-12 Program to fulfill promise of future Naval commission.

December 2, 1942
Signed up for V-1 Program as enlisted man on inactive status while undergoing college training with promise of commission when ready for Midshipmen's School. All V-1 students were transferred to the V-12 Program to fulfill promise of future Naval commission.

July 1, 1943
Assigned to active duty from V-1 to V-12 at the Naval Training Unit at Tufts CollegeV-12 Welterweight and Middleweight Boxing Champion

1944
Transferred from V-12 Program to the Naval Midshipmen's School at the University of Notre Dame
Middleweight Boxing Champion of Midshipmen's School
Volunteered for the LCT (Landing Craft Tank) duty or any craft to hit the beach in the first five waves
Commissioned as Ensign upon graduation
Ordered to San Francisco before reporting to Hawaii for LCT indoctrination
Awarded Admiral Nimitz Naval Citation with star for taking first LCT from Pearl Harbor to Philippines. LCT traveled on its own power for forty-three days instead of usual launching from an LST (Landing Ship Tank).
Duties of LCT included loading of ammunition from Victory and Liberty ships for transfer to Battleships, Aircraft Carriers, Heavy and Light Cruisers, Destroyers and all other fighting ships of the Navy.

Boxing fight in Cousens Gymnasium. Dean Wessell and Captain Preston B. Haines, U.S.N., were present at the fight. Captain Haines made the following statement after the well fought match was finished:

There's blood on this deck. The blood of welterweights who fought to the end - winner and loser. That is why America will be victorious in this war…

After graduating from Tufts College John Zamparelli went on to earn his Juris Doctor Degree from Boston College Law School where he finished in the top ten in his class. Zamparelli had a long and distinguished career as a lawyer, retiring his practice, located in Medford Square, after fifty years. He was also elected to multiple public offices, the Medford School Committee, State Representative, Middlesex County Register of Deeds, as well as the first Parochial School Committee, the Saint Francis of Assisi School Board. Interested in both law and government, he was, and still is, involved with a number of political, community, and educational organizations and campaigns.

Zamparelli's outgoing and welcoming personality make him a natural on the podium. Whether Keynote Speaker, Master of Ceremonies, or honored guest at dinners and events, Zamparelli is known for his charismatic speechmaking. In 1986 The Sunday Sun in Lowell, Massachusetts reported that at the 1984 Democrat's annual dinner "Zamparelli got by far the biggest applause of the evening, though other speakers included Ted Kennedy, Mike Dukakis, Tip O'Neil and eight candidates for president." Chester Atkins commented, "The national press corps was completely baffled. They wanted to know, 'Who is this John Zamparelli?' "

Throughout his career Zamparelli's education and Alma Maters have had a fond place in his heart. Upon receiving the Tufts Jumbo Club Award in 1977 from the University, Dr. Edward O'Connell wrote the following words to illustrate how Zamparelli's experience at Tufts shaped his life in a positive way.

The fighting spirit which made you a boxing champion at Tufts and Notre Dame and an outstanding blocking back for Tufts football teams has been the hallmark of your illustrious political career. In numerous elections citizens declare you to be still their champ.

In gratitude for the education and experience both he and his wife had as Tufts students, Zamparelli donated the John F. Zamparelli and Betty Doane Student Conference Room in Mayer Campus Center.

Before entering law school, the veterans of Brooks Village asked Zamparelli to represent them before the Medford School Committee seeking public kindergartens. Not content with the School Committee's action, Zamparelli announced for a seat on the Committee against the chairman and won. During his tenure, numerous positive advancements were made, including the establishment of public school kindergartens.

Middlesex County Register of Deeds for twenty years, Zamparelli served as President of the State Association, initiated Registry computerization, authored a manual for Land Court Use and procedure and published articles on Documentation Uniformity and Property Rights. 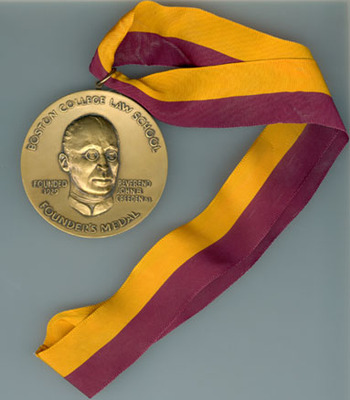 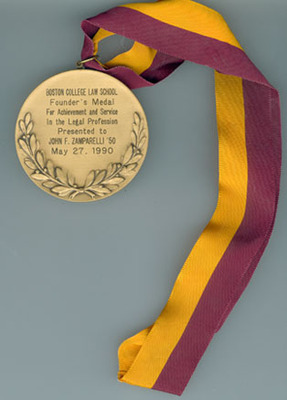 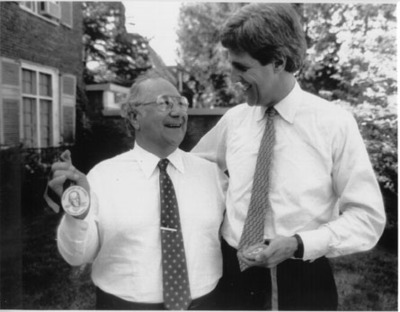 Zamparelli received the "Founder's Medal", the highest award of the Boston College Law School in honor of achievement and service in the legal profession. Also receiving this award at the 1990 Law School Commencement was Senator John Kerry.

Zamparelli was one of fifteen Massachusetts attorneys honored by the Massachusetts Bar Association in recognition for fifty years of practicing law.