Muriel Simonson was the first child born April 25, 1907 to Carrie (née Allen) and Wilmot H. Simonson, a traveling salesman who sold fruit drink mixes, biscuits, and Mrs. Simonson's Lemon Meringue Pie. Two years later in 1909 Muriel's brother, Wendell A. Simonson was born. The Simonsons were a comfortably middle-class family, and Muriel was the first in her family to go to college.

She enrolled at Jackson College, Tufts' coordinate college for women, in the fall of 1924 where she was one of only two Medford freshman. While a student at Jackson College Muriel excelled in academics, theater, voice, and theater productions. She was a sorority member, a student leader, and an athlete on the field hockey team. Muriel was also the first undergraduate theater producer (male or female) at Tufts University.

While at Jackson College Muriel met John A. Holmes (A '29) and the two became officially engaged in the spring of 1929. The engagement was announced in a local paper. A year later their engagement was dissolved. Upon the donation of Muriel's papers to the Tufts Digital Collections and Archives (now Tufts Archival Research Center) a binder of poetry written by Holmes and gifted to Muriel was bought to light and made available to researchers. You can read two pages from that binder here in this exhibit. 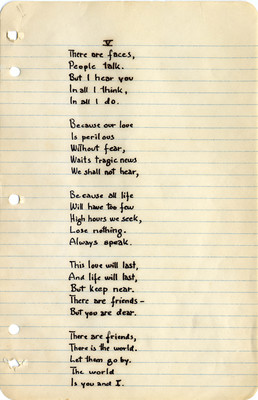 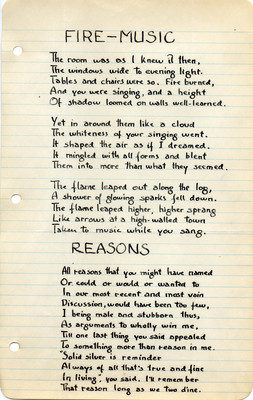 After graduation from Tufts, Muriel worked briefly as an English high school teacher in Norwell, Massachusetts. In 1931 Muriel married Walter John Rhodes (1903-1996) and became a homemaker, working outside the home as a substitute teacher only on rare occasions. Muriel instead kept busy with volunteer work, involvement with her church, and playing contract bridge.

This exhibit is meant to serve as a window into the life and times of Muriel Simonson, a female college student in the 1920s. Within this exhibit you'll find pages summarizing Tufts in the 1920s, discussing Muriel's academics and social life, and her drama career at Tufts.

Citations can be found on our citations page

To conduct further research inspired by this exhibit, visit our about page.